This is when a good multitool really pays off! When you’ll find yourself on an away mission with nothing more than the stuff you have in your pockets.

Now, this versatile tool is a powerful tool for SOG.other is BIBURY 18 in 1 multitool.

BIBURY  it’s a competitor to the Gerber NXT and Gerber trust at that price, and I will give you an overview of that in my opinion on that multitool, so lots of stuff to discuss. I hope you enjoyed this episode.

Now, this multitool is the SOG power-play. 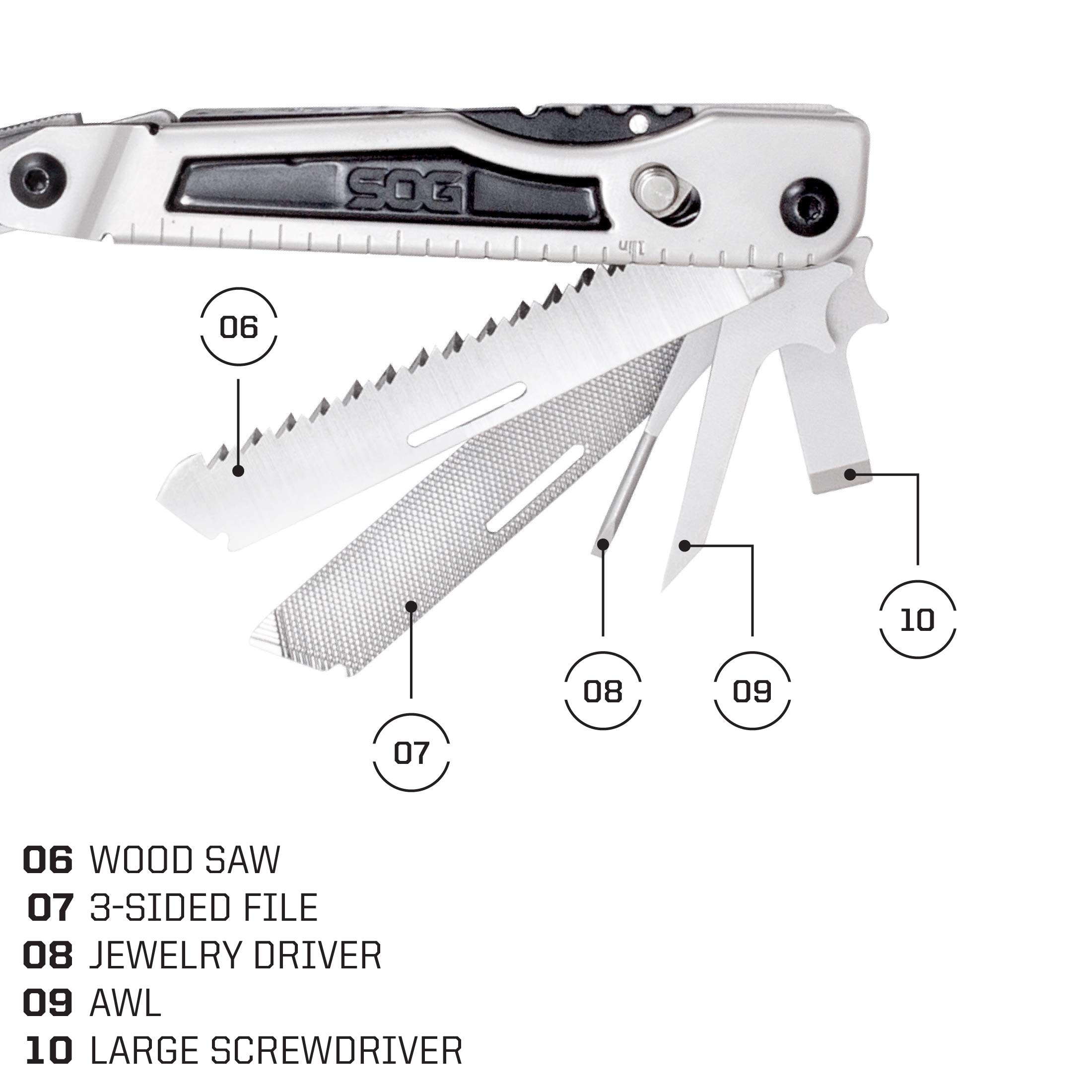 Fully serrated blade, can opener, bottle opener, and three screwdrivers on this side. There’s the metal file. a wood，a saw, a miniature screwdriver, and another screwdriver. 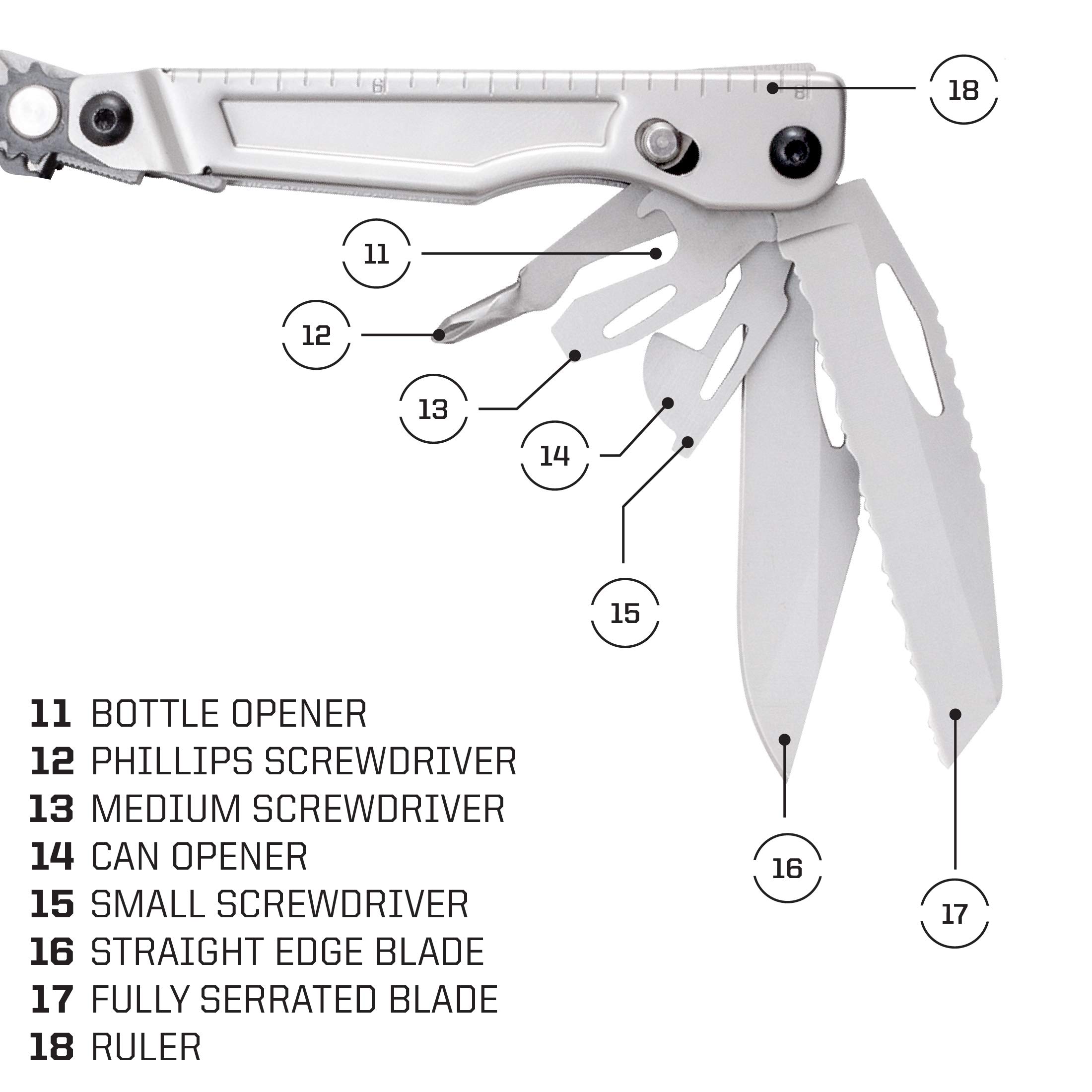 There’s also an AWL and typical multi-purpose pliers. they are not
spring-loaded, but it does have a compound leverage system, and it’s got the wire cutters. Remember this gear. This is the compound lever system. They make the opening very smooth, just like you can easily open them one-handed, and they multiply your force.so if you need to grab something hard, that is a good feature.

Also, keep in mind there is a bit driver in there, so for example, here’s a bit of an extension and a socket, so it has a built-in bit in drive and it will accept a standard-sized bit to set the bit there. from my multifunctional anecdote tool and then extended,it came with one of my shreds. Believe it or not, so the bottom line on this tool. Every major tool you can think of is pretty good. Except no scissors, but then again, I love my rebar,it doesn’t have scissors so everything but the scissors, The purchase price in 2019 is $40, and now it’s $108.99 on Amazon,it is actually a very comprehensive toolset.but The price has more than doubled.

Department this thing has gone down in price now this is my BIBURY
multitool, now the price $27.99 . It’s better than most other 28$ tools.because of the toolset and the extra heavy construction.This does have a one-handed opening on all four the four major tools,and it has a safety lock. So it’s good,A-frame like this is really heavy and thick. Those incisions there, like they had to put those cutouts there because if they didn’t with how thick this is that it would be just uncarrier ball but as it is it’s still heavy. it’s well made now. This has a combo-edged blade has a file it has a saw and it has this combination tool for the longer slots, right but thank God they didn’t put the fully serrated blade. Because these cheap multi-tools they never do serrations right so they gave you that double opener and screwdriver and wrench tool is that combo tool instead of scissors or instead of a poorly done serrated blade. Actually a good design compromise for this price range it also has a line cutter it’s got a bit driver at the end of one of the handles and it comes with two double-sided bits.o that’ll be four screwdrivers for the bit driver right and it has a glass breaker as well and of course, the pliers with wire cutters so you get all that for your $27.99  and it is also very heavily constructed. I think tenacity is closely related to weight.

About the Author: Bibury

<\body>
Select your currency
USD United States (US) dollar
EUR Euro
[]
WELCOME TO OUR SHOP
SUBSCCRIBE NOW TO GET A 15% COUPON. DON'T MISS OUT!
SUBSCRIBE
I agree with the term and condition
No, thanks
We will never spam you, unsubscribe anytime.
0
YOUR CART
Subtotal:
$0.00
CHECKOUT
BEST SELLING PRODUCTS